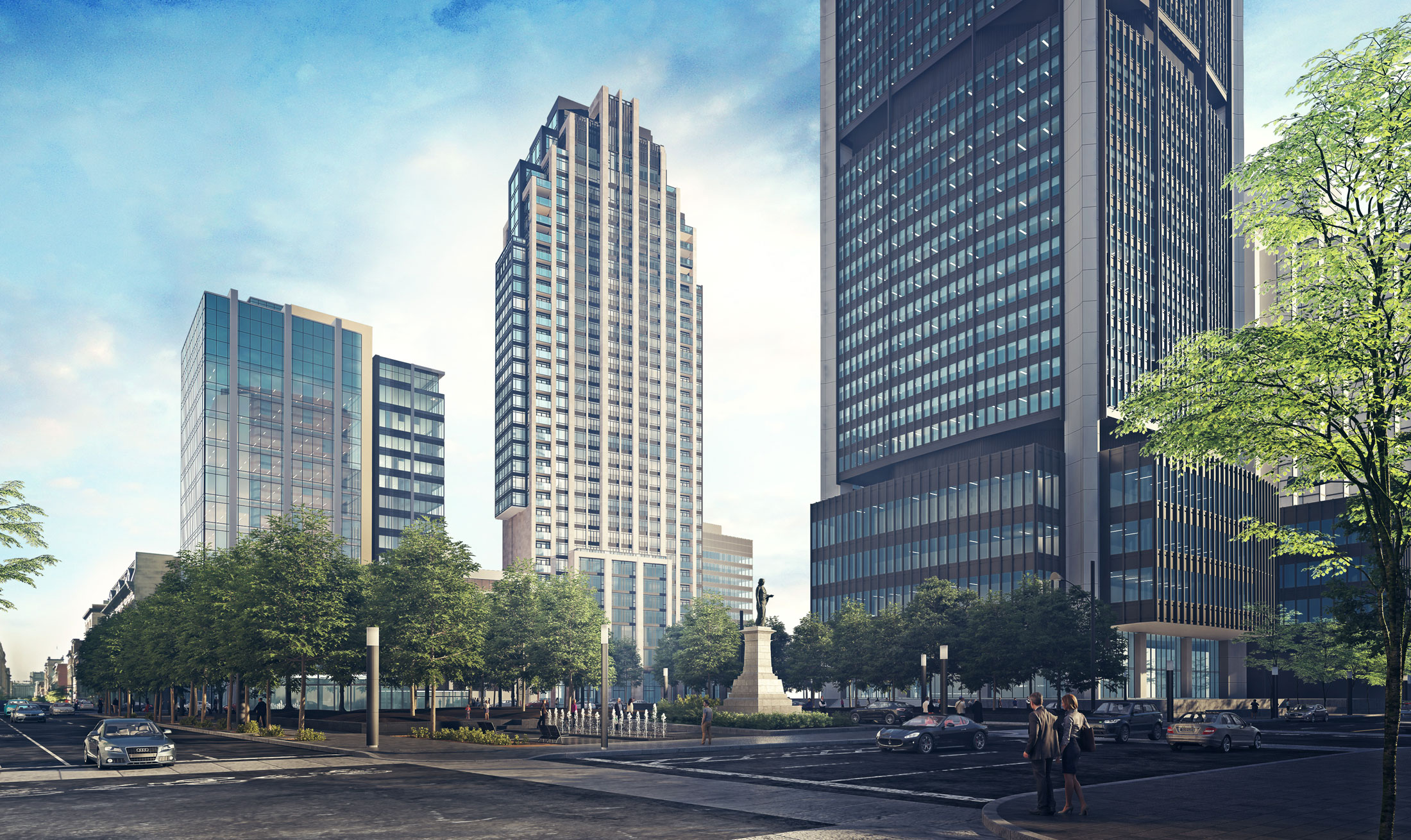 Sitting in the sales office of his latest big project, Michael Broccolini just can’t stop smiling. And with good reason; he is describing how buyers responded to his new 35-storey condo development, “We opened it to public sale the second week of October, and a week later we were 80 per cent sold.”

That is a stunning sales performance. The tower, named for its municipal address, 628 St. Jacques, will have 258 units, meaning Broccolini and his team sold about 200 condos in seven days. “We knew the market was on fire, we just didn’t know what “temperature” the market was,” he says.

“It is quite an achievement,” Broccolini says, smiling. “I feel really good about it.”

Broccolini’s success is consistent with recent economic reviews of Montreal real estate trends, including the latest quarterly report from the Quebec Federation of Real Estate Boards. It reported significant increases in transactions at the higher end of the real estate scale; a jump of more than 30 per cent for properties worth more than $500,000 and 40 per cent increase for properties worth more than $700,000.

But why is the high-end category so hot right now?

There is, of course, the real estate adage “location, location, location,” and that could explain in part Broccolini’s success at 628 St. Jacques. It sits on prime real estate, on Victoria Square in Old Montreal. A five-foot model of the project promises an Art Deco-inspired tower. “We wanted it to look like it belongs in Old Montreal or old New York,” says the 28-year old entrepreneur. But that doesn’t really explain the rush to buy. Not even the rooftop sauna and pool (“tallest pool in the city”) explains it.

Broccolini says his project and other luxury projects in the city are doing well because Montreal is doing well.

“Look at unemployment at a 30-year low. Last year, Montreal created more full-time jobs than the rest of the country combined. Tourism is up, and things like more direct flights to places like China … all these things add energy to the city. In my lifetime, I don’t think there has been a better time. I don’t think Montreal has been as “hot” as it is right now.”

If you build it … they will buy

Broccolini is not the only one successfully selling high-end properties right now.

A year ago the Gazette featured a luxury development project by Groupe Quorum, in Laval Sur Le Lac. At the time, construction of Phase One had just started and the sales pitch just launched. Now, Quorum’s marketing manager, Maxime Laporte, is also wearing a broad smile.

“We are 50 per cent more progressed than we expected to be at this time. Phase One is due for occupancy in February and is 90 per cent sold. Phase 2 is being built and is 60 per cent sold and even Phase 3 has hit 50 per cent sold, so construction of that is being moved up. The sales and absorption of this luxury product have exceeded even our own forecasts.”

Laporte agrees that the health of the Montreal economy is partly responsible for the positive trend, but mostly he credits the high quality of new luxury projects for pace of sales … an ‘if you build it luxuriously, they will come’ idea.

“It has been years, since the ’80s and ’90s, since there was a big push of luxury products built. Now, those are older inventory. If you think about Westmount or along Sherbrooke St., those luxury products are in good shape, but they are the style of the last century, and luxury is the ‘gout de jour.’ You want the condo of today, with the different use of space and design. So, this is the right time to be selling the latest in luxury,” he says.

Eve Drouin sells “dreams that come true.” She is the project co-ordinator of 3-33 DuCanal, which is the street address of “the last piece of developable waterfront in Lachine.” And it is the word “waterfront” that defines the project. “None of our clients were looking to buy, they were not active buyers. They are people who wandered by and came to take a look. They say: ‘I always dreamed of living on the waterfront and now I can.’ ”

Well, they can if they have a million dollars or more. The homes will vary between 1,800 square feet to about 2,400 square feet and cost between $1 million and $1.4 million before taxes. Four of the 10 units are sold or reserved.

On one side of the property is the Lachine Canal; on the other, the St. Lawrence  River and a view of the Mercier Bridge. Immediately beside the property is Parc René Lévesque, while in front there are bike paths and the marina. “Everyone who comes here says I feel like I am on vacation,” Drouin says. Keeping that vacation zen means every bedroom of every house has a view of water. The houses have huge windows and 9X15 foot patio doors. “They are the canvasses of the exterior.”

Who is buying all these luxurious homes? Drouin, Broccolini and Laporte all agree: Montrealers. Stories abound about international buyers and Canadians fleeing the overheated housing markets in Vancouver and Toronto, but the developers of these luxury properties have seen very few foreign investors. The vast majority of their sales are to locals looking for something unique.

“In our case,” says Drouin, “this is mostly about downsizing. Our clients are Montreal business people or professionals. Their kids are gone and they feel ‘it is my turn.’ One of her buyers is completely opening the second floor into a master suite with a tiny kitchen and a work studio. Another wants an elevator built from the garage in the basement to the rooftop terrace. “This is luxury for them, a home designed for them. A home they will live in for a long time.”